The Import feature allows you to import Trades and entire Positions into ONE from a file supplied by your broker. Instead of manually creating the Trades using the Modelling facility in the Option Chain screen area, the Trades are loaded automatically from a file. This saves time and effort, and reduces the prospect of user error.

Show me how to Import Trades...

On selecting the Import facility on the "Home" tab of the ONE Ribbon screen area, the following introduction popup window will be displayed: 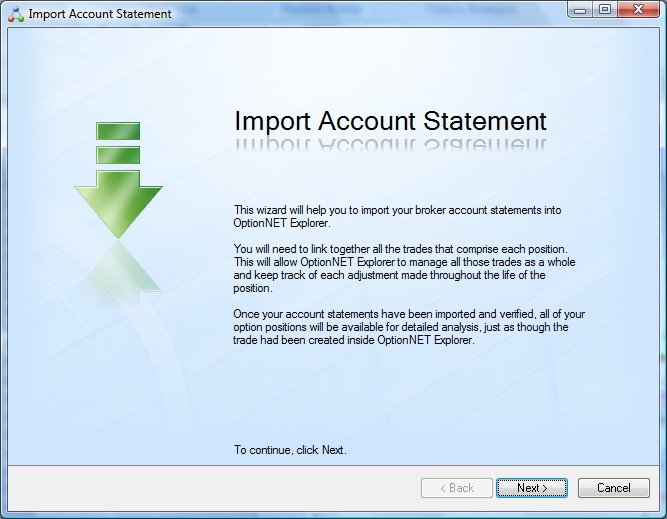 Pressing "Next" changes the window to the following, where you enter the File Format (data source) using the dropdown as shown: 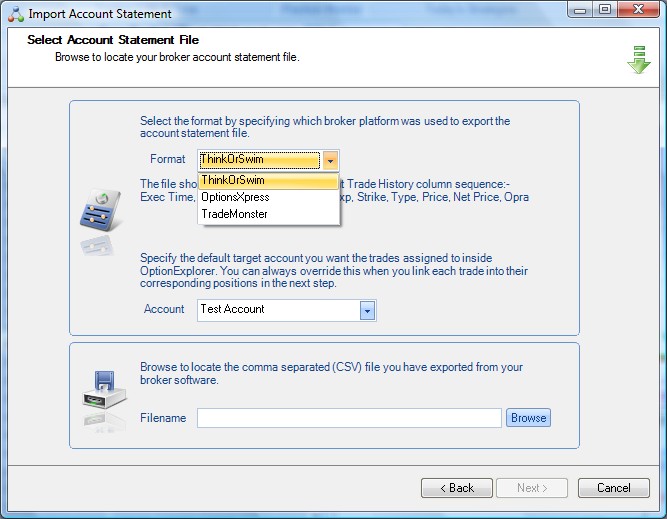 You also need to enter the ONE Account into which the trades are to be created (use the dropdown to select the required Account) and the filename of the file to be loaded (use the Browse button to locate the file on your computer).

Note that after selecting the file Format, the window will display immediately below it, a summary of the fields expected:

After entering all the relevant details, press the "Next" button to start the load process.

If there is an error in the load file then ONE will display an error message, as in the following example:

Note that the message includes a reminder of the fields ONE is expecting to find in the load file - this is because the vast majority of errors encountered when importing trades are due to an invalid format.

If the file format is acceptable to ONE, you will then be presented with a window detailing all the Trades found in the load file. For example, if the load file contained details of 8 individual trades then the window would look something like the following screen shot: 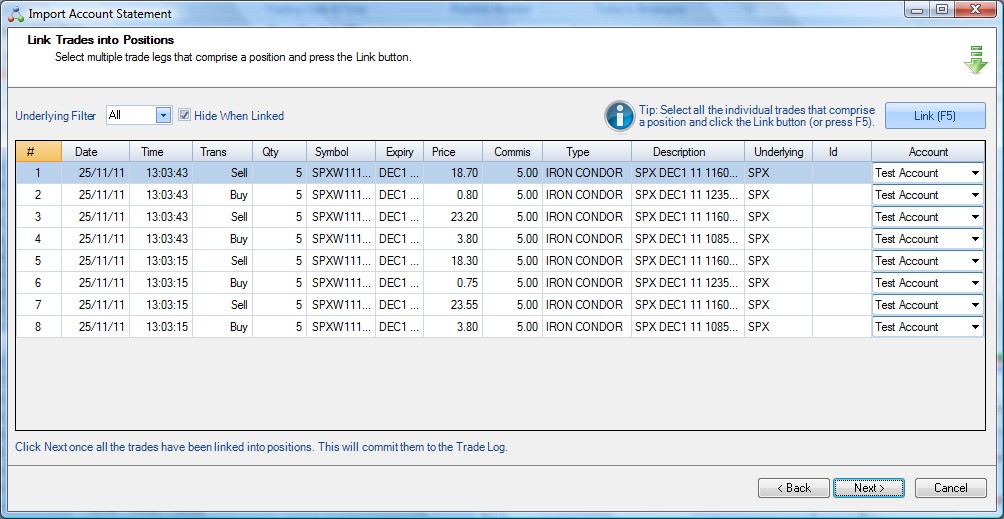 This window is entitled "Link Trades into Positions" and, as its name suggests, it is used to group individual trades together into Positions. This step is necessary because ONE cannot tell from the load file which Trade belongs to which Position and therefore you will need to supply that information.

How do we link one or more Trades together to form a Position?

The answer is that you first need to identify which Trades belong together. Starting with your first Position (it doesn't matter which as you will be repeating this process until either all Trades are linked to Positions, or you have processed all the Trades you wish to import), you highlight all Trades on the Window that belong to that position. Highlighting is easy - while holding down to Control Key ("Ctrl") on your keyboard you click your mouse on each line displaying the Trade to be linked. Clicking a highlighted line again will un-highlight the Trade.

For example, the following screen shot shows the same Trades as in the previous screen shot but line 1 has been un-highlighted and line 4, 5 and 6 have been highlighted instead. The intention is that these three trades (4, 5 and 6) all belong together in a single Position: 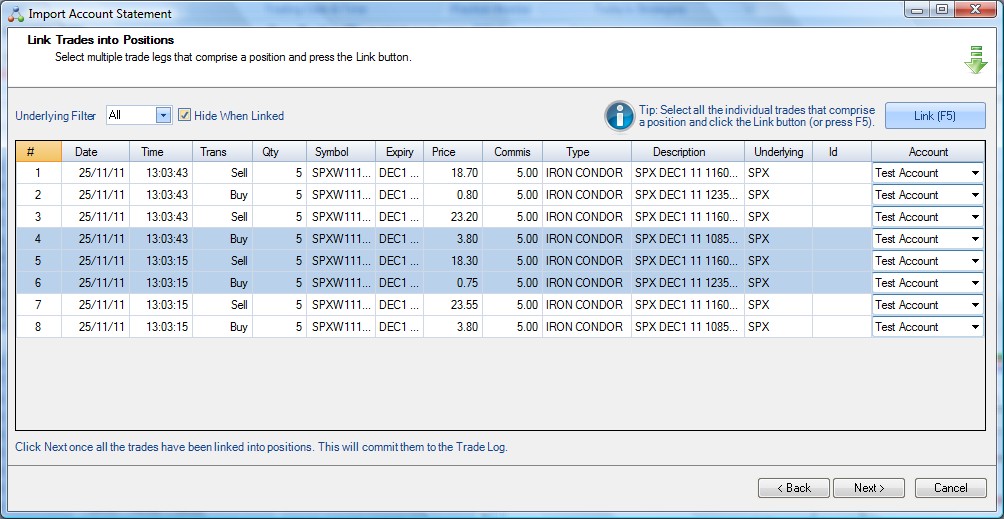 Pressing the "Link" Button (or F5) will start the linking process where you will then be presented with the following window which asks you to give some further details about the proposed Position: 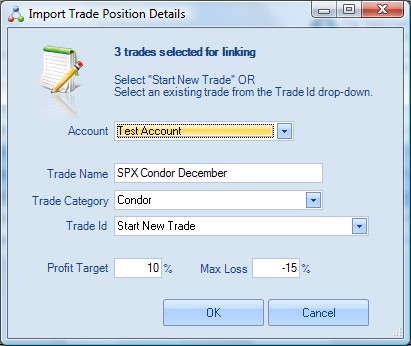 The following information is requested:

After entering these details press "Next" to continue. ONE will now create a Position (or amend a Position if it already exists) and add the selected trades. Finally ONE will return to the "Link Selected Trades into Positions" window to allow you to continue to link the rest of the file you are trying to import.

Note that what you now see depends upon if you have the option "Hide When Linked" selected.

If "Hide When Linked" is ticked you will see something like the following screen where the Trades already linked are no longer shown: 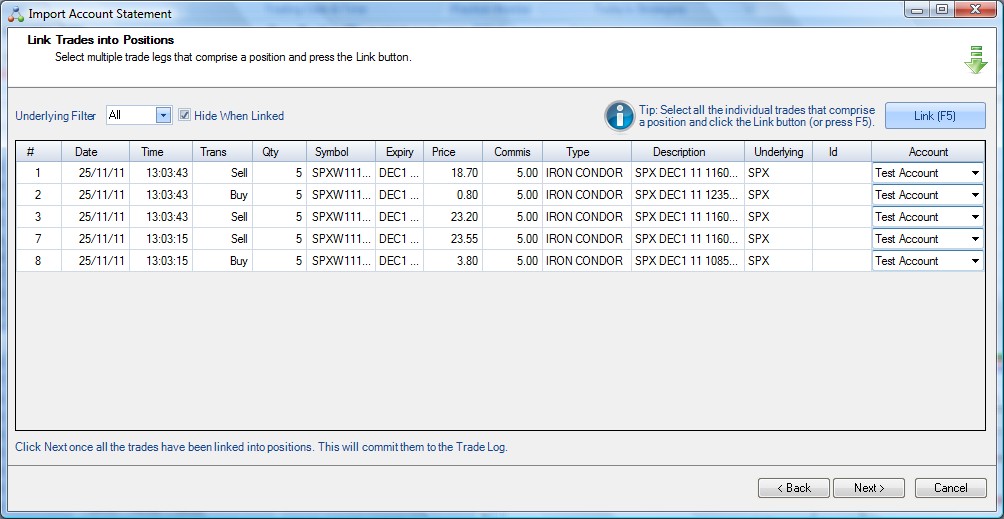 If however, "Hide When Linked" is not ticked then you will see all Trades in the load file irrespective of wherever or not they have been linked: 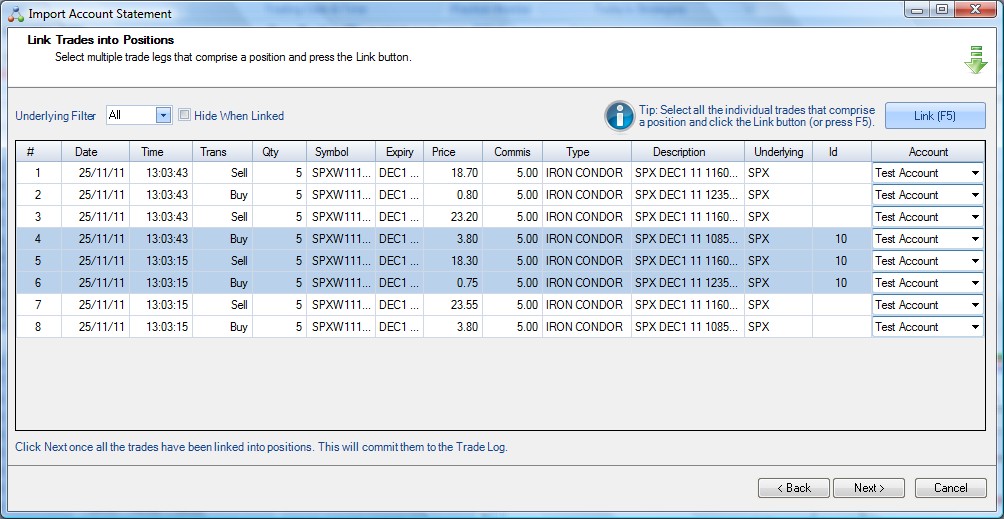 Note that the Trades already linked now have a value specified in the "Id" column = this is the (new) Trade Id of the Position just created.

If you attempt to import a file (that is, you press the "Next" button in the "Link Trades into Positions" window) without linking any Trades then you will receive the following error:

Also, if you fail to link all trades in the input file, you will receive the following warning (any trades not linked are ignored and will not be imported):

It is important to note the following restrictions on importing data:

1. If you need to override any of the margins automatically calculated by ONE during the import process, you can do so by manually amending the Position Snapshot.

2. If importing a trade for today (LIVE) then not all data is available until the next market trading session has opened. For this reason, the Implied Volatility and Underlying Price in the Position Snapshot must be entered manually after the import has completed.

Tell me more about importing trades...

ONE currently supports the following data sources for file import...

My file won't load into ONE...

A common problem, but usually caused by one of the following two oversights:

•Does your load file match the format expected? Check that you are exporting from your broker software those fields, and only those fields, that ONE is expecting and in the correct order.

•Is the file readable (can you open it using a word processor like Notepad or Word)?

You cannot manually construct a load file using a spreadsheet or word processor because ONE expects additional information to exist in the account statement file. You also can't export from your broker software on a MAC and then load the file into ONE running in a Windows environment because the line formatting is different. The only way to guarantee correct composition is to export from the broker software itself, in the same Windows environment as ONE is running.

Any other problems, please email Support@OptionNetExplorer.com or go to the Support Suite and create a support ticket for assistance.

Tell Me More About: